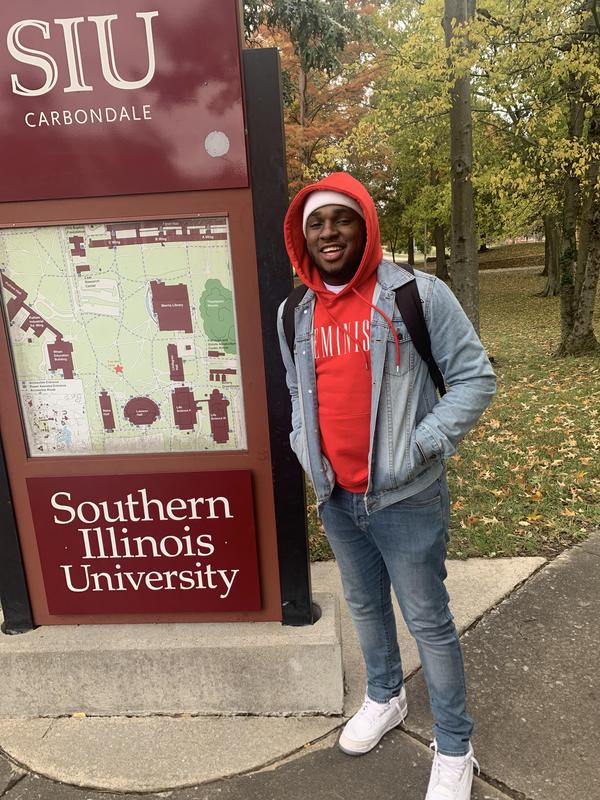 TC continues to combine academics and work as a men's basketball team manager in his sophomore year at Southern Illinois University.

Timothy “TC” Caldwell ’18 credits learning important time management skills while at CTK with easing his transition to college. Currently a sophomore at Southern Illinois University, he adeptly juggles a full course load comprised of classes in his Sports Administration major and Psychology minor, with his 20-hour work week as a Team Manager for the SIU Salukis men’s basketball team. This week he will accompany the team to Florida for the Sunshine Slam supporting the coaches and players by assisting with drills and tracking stats.

As a 3-sport athlete at CTK, TC had to learn how to balance academics, his work study job at Winston & Strawn, and practices/games.  One of his fondest memories at CTK was playing in the first tackle football game his senior year. He had been part of the CTK flag football team, and their request to the administration for a tackle football team was finally fulfilled after they won the flag championship, and all team members had remained academically qualified.  The first game was a Friday Night Lights game against St. Ignatius College Prep on their home field.  It was emotional for players and coaches pre-game, but coming out of the locker room to see the stands full with CTK supporters gave them a burst of energy that carried over to their on-field performance.

Another memorable experience was volunteering for two summer trips to help build houses as part of the Appalachia Service Project program with St. Giles parish. In his second year, he was asked to take on a leadership role, handing out assignments and ensuring projects were completed.  CTK teacher, Mike Laughlin encouraged TC’s participation, and counseled him on the real world, where “every assignment matters.” He reflected on his service experience, saying: “Helping other people makes them and you feel good.  It can be a small thing, but it has a big impact on them.”

His four years working at Winston & Strawn while at CTK helped TC to break out of his shell and become more comfortable talking to people he didn’t know. As his confidence grew, he earned his supervisor’s trust and increased responsibilities. The same has been true as a SIU team manager, as one of two returning managers, he has taken on a larger role this year due to his increased confidence and contributions.  He is considering pursuing a graduate assistant coaching job when he graduates, with aspirations of eventually going to law school.

Tim looks back fondly on his CTK experience, the friendships made, the lessons learned from his teachers and co-workers, and the impact made in the community.  “CTK is an extended family for me. I know I’m always welcomed there.”

Best of luck, Tim!  We can’t wait to see you back at CTK.