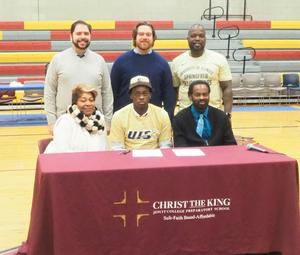 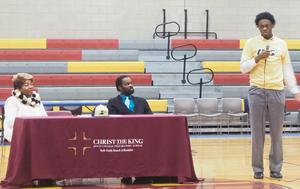 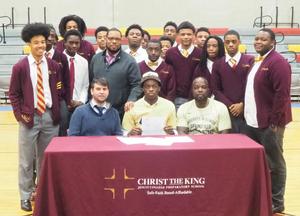 The CTK community celebrated a historic first when Armani ’20 signed his NCAA National Letter of Intent to attend the University of Illinois Springfield on a full basketball scholarship next fall. A signing day ceremony was held in the CTK gym with Armani’s parents, coaches, teammates, classmates, and teachers in attendance.  Armani said he felt positive vibes and energy, and while he was a little nervous and emotional, there was “good butterflies”, knowing he had accomplished his goal of earning a scholarship to play basketball in college.

The opportunity was the result of Armani’s hard work in the classroom and on the court, along with the support of his Gladiator coaches, led by Coach Caldwell, and Athletic Director, Mr. Bajner. Coach Caldwell shared that: “I’m extremely happy that all of the hard work Armani put in has paid off. His signing brings added exposure to the CTK sports program, and provides a tangible example for the younger athletes that if they put in the effort, they could be next.”

Armani advises his younger teammates to, “always listen to the coaches, and do what they ask of you, and it will lead you in the right direction.” He is looking to finish the season strong, with goals of winning the Chicago Prep Conference, and advancing deep into the State tournament.  He is excited for the new start and environment at U of I Springfield, where in addition to basketball, he will major in Business.  One of the reasons he felt that UIS was the right choice for him, was the coaching staff’s focus on emphasizing more than basketball, in helping the players to become better men.  Congrats and good luck!