100% College Acceptance for the Fourth Year in a Row! 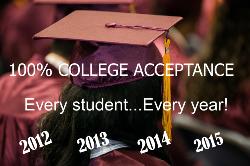 For the fourth consecutive year, 100 percent of Christ the King Jesuit College Prep (CTK) seniors have been accepted to college. Every student. Every year!
Christ the King seeks to advance the promise of young adults by inspiring and preparing its students to become creative leaders; "men and women for others" who are committed to work for justice in the Church, in the civic community, and in their chosen profession.

Students in the Class of 2015, have accrued more than $1.5 million in academic scholarships and financial aid. The graduating seniors have acceptance letters from nearly 100 colleges and universities. Each senior has worked incredibly hard to earn admission into; including Loyola University Chicago, Marquette University, Xavier University, The University of Iowa, and many others.

“When I came to Christ the King, I was afraid to ask for help and come out of my shell,” said Senior, James Dale. “After I opened up, met new people that lead to great opportunities. This fall, I am headed to the College of Holy Cross on a full academic scholarship. I am so thankful to the faculty, staff and classmates to push me farther than I ever thought possible.”

This year, CTK seniors have spent countless hours writing essays, refining their resumes, and attending a college prep course, in addition to maintaining excellent academic and work-study standing as a CTK student this year.

Later this spring, the Class of 2015 will announce to our community where they plan to attend school in the fall. The theme for the event was “Continuing to set the world on fire,” showcasing how CTK students will continue to leave their mark on the community and be successful in the future.