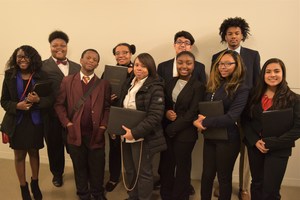 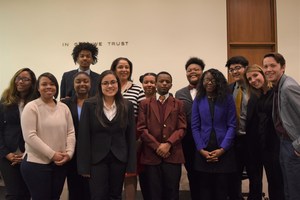 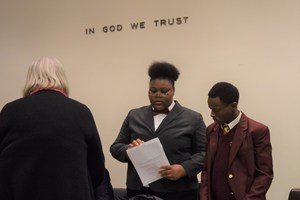 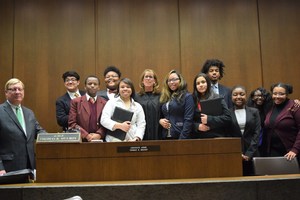 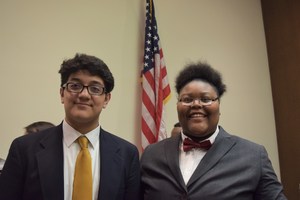 CTK’s mock trial team earns best finish in 5 years, and gains valuable courtroom experience.
Ten Gladiators competed in the 5th Annual Howlett Cup Mock Trial Competition on March 23rd and 24th. The Howlett Cup is an “invite-only” competition for Catholic schools in the Chicago-area. Each school enters with two teams: one each representing the prosecution and defense, with three witnesses on each team, in addition to those in attorney roles. Preparation for the event is a time-consuming process, beginning in January with the receipt of the mock trial case. The teams become familiar with the case problem and then develop a theory on how best to represent their “client”. The team and coaches meets twice weekly, and then also on Saturday mornings to work on final presentations leading up to the trial.

At the Howlett Cup, CTK’s prosecution and defense teams joined student teams from Cristo Rey Jesuit, Cristo Rey St. Martin, Fenwick Academy, Loyola Academy, and Mount Carmel High School in presenting their cases in an actual courtroom in front of judges and other legal professionals. Long time attorney coach, Marsha McClellan, noted the value of participation, “Not all students intend to pursue a career as a trial lawyer, but they understand that no matter what career path the may choose, it is important to be able to articulate a position, and the relevant points that support the position.”

The CTK prosecution team led by lawyers Jesse ’18 and Gwendolyn ‘19 advanced to the final trial along with Loyola’s defense team, ultimately earning 2nd place! Ms. McClellan noted that, “At the close of the competition, it was observed by the legal professionals serving as jurors and judge that Jessie and Gwendolyn represented their client as effectively as many lawyers would have done.” Strong performances were put in by all CTK team members: Jasmine ’20, Alex ‘21, Jarnae ’18, Alexis ’20, Adrian ’20, Janae ’20, Kamille ’21, and Christian ’20.

Special thanks to the team’s volunteer attorney coaches - Marsha McClellan, Brittney Burns, and Wendy Cornejo (both from the Cook County State’s Attorneys’ office), and faculty moderators – Griffin Muckley and Maura Rocks, for the countless hours invested in advising and preparing the students for their days in court. Well done all!